Thank you to all those players that have signed up! Unfortunately, I can only take the first 7 teams. Stay tuned for more exciting tournaments!

There will be 6 rounds. All maps will have 24 hours turns, increasing cards, original dice, sunny (no fog), no advance cards.

For each round, all teams play against each other on the same map and settings. Each team will play 3 games simultaneously. (All 7 games in each round are played simultaneously.) Every two weeks, then the next round will begin regardless if the previous round is complete. This will keep the tournament going. For example:

For each kill your team makes, the team earns 1 point. This does not include killing your teammates. The team that wins the game will earn 4 points. The maximum points won per game is 10 points. The team with the most points will win the tournament. In an event of a tie, the two top teams will win the best out of three in a 3v3 game on the map Zealandia: Deathmatch. Results will be listed here in this table.

Current Standings After Round 3. 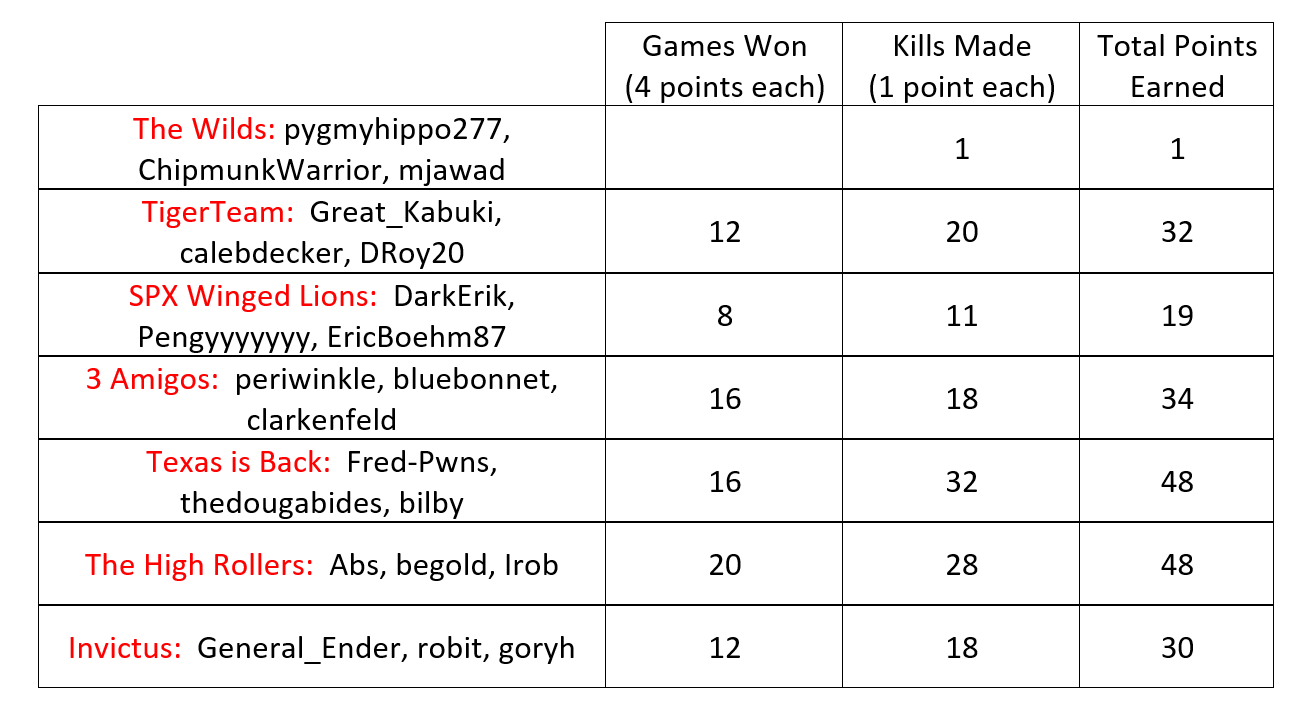 Time Commitment:
This tournament will take approximately 3 months to complete. Make sure you find teammates that can commit to this length of time. If players are not able to complete the tournament, the team must replace a teammate with another player of their choice within 72 hours. Otherwise, the team will be assigned a substitute. Substitute players are players that signed up without a team and are on the wait list.

1. Each player will have 30 rating points deducted when the first game starts. This will be a manual adjustment. An email message from me will be sent prior as a reminder.

2. Each player must have a minimum of 10 team games played or have their teammate vouch for them.

3. Have 1 representative from your team respond to this forum post with the players’ name and name of the team. Players that sign up without a team, will be matched up with a team. If there are not enough players to make a team. They will be contacted if a substitute is needed and be put on a wait list.

Donations of tokens are also welcomed! Tokens will be shared in the following way: First place 70%, second 20%, third 10%.
Periwinkle: 9000 tokens

To enter. say "Im in" or something likewise. If you don't have a partner, I will pair another independent player up with you. You will be paired up with someone. If your fair play score is low, you may not qualify.

Fight In The Fog Pairs Tournament

Fight in the Fog is a team death-match pairs tournament with fog of war and capped cards.

8 player games, 4 teams of 2 all big maps, capped cards at 25 and with fog of war this will mean strategy matters more than it does in increasing card games.

NOTE: To join type in the thread, "I'm in" and add your partner's name so I can pair you up with the player you want to team up with.